Power to the people

Maddy-Rose, affectionally known on Twitter and Insta as @enviromads, is a razor sharp climate change activist from Lismore. Since her stepping up and co-leading Intrepid Landcare in her community, life around her has almost exploded with taking on new opportunities that require her to step back on other things. So, she is hoping some new young people can reach out and have a chat about taking carriage of Northern Rivers Intrepid Landcare.

So what does it involve? 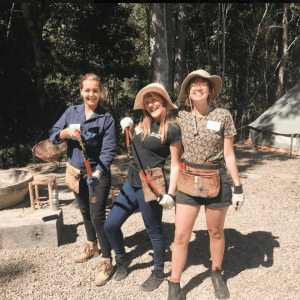 Basically co-design super fun events with Landcare groups across the beautiful Northern Rivers region. Last year, they held a wonderful event, ‘Creeks n’ Grass’, which saw more a bunch of young people gather, share stories, learn, weed, plant and hoo-la-hoop! YEW. This was a collaborative, co-designed event and was great fun. Remember, events and activities can be as small or big as you want them to be. They can be casual bushwalks, joining existing Landcare activities with local groups, or creating and co-designing your own events.

It would be wonderful to see Northern Rivers Intrepid Landcare exist, grow and get more young people involved in having a good time while caring for country and doing stuff that matters. To reach out to Maddy-Rose and have a chat about what’s involved you can text her 0497274080/ email mrbraddon@gmail.com or email us at hello@intrepidlandcare.org.

“Intrepid Landcare are such an awesome group to be a part of”, said Maddy-Rose.