A few months ago, they joined forces with Cumberland Land Conservancy (CLC) for a weekend at their site, Wallaroo. Wallaroo is a former grazing property and has since become community land and is actively managed by the Conservancy. Here is a low-down of what happened… 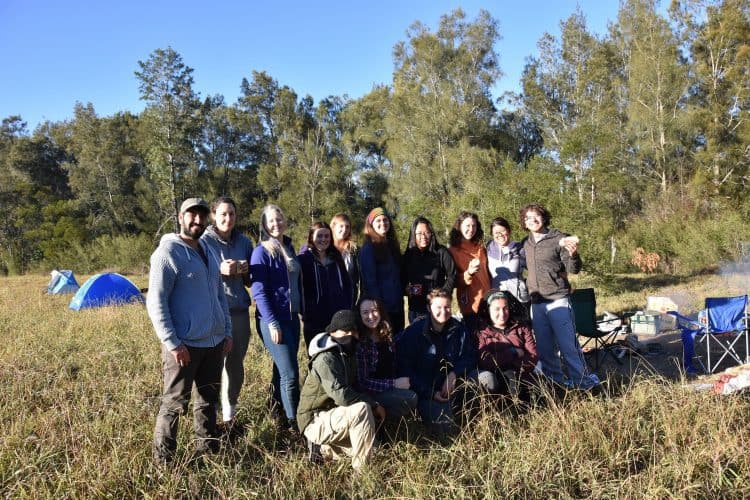 “We were were taken on a tour of Wallaroo by Linda, the Ecologist for CLC, and while walking through the property we learnt how the site is protected as a conservation area, including how volunteers are bringing the site back to its former natural glory. We spent some time removing introduced weeds. For those of us who hadn’t done bush regen before, we were able to learn from Linda and others about how to identify the plants (for instance, the description of Christmas tree top with clumped seed stems made the job easier). Excitingly we found a shell of the endangered and hard to find Cumberland Land Snail, which is a sign that there are likely to be some snails in the area. 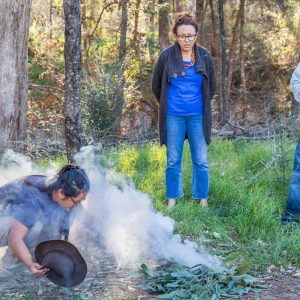 Uncle Lex and Aunty Vanessa Possum, Darug Elders, joined us for the afternoon. They led us through a smoking ceremony and we shared an afternoon learning about the Darug People’s connection to the land. Uncle Lex had us guessing to what the rare material used for sealing canoes was, and it took us a while to realise it was beeswax! We sat around the fire passing around tools, making bracelets out of stringy bark while Uncle Lex told us stories and we chatted until the sun was starting to set. For the whole afternoon there was a juvenile Yellow Tailed Black Cockatoo perched in a tree nearby watching over us. It was a privilege to listen and learn from the traditional custodians of the land.

In the evening, local bat expert Leroy, joined us for an introduction into bat watching, explaining how the monitors he uses tracks what bat species are likely to be in the area. Following this, he took us on a tour of Wallaroo looking for these little cuties. However, some of us weren’t so light footed, pulling off a very good impression of a rhino in the undergrowth. Despite this, we were all excited and lucky enough to see a Southern Myotis, also known as a fishing bat, swooping down for a feed or drink at the dam.

We all survived the chilly night (just) and were treated to a morning of bird watching. Mark Fuller, a bird extraordinaire, took us around Wallaroo and he pointed out over 40 bird species. His enthusiasm was infectious and it was great to be able to learn bird watching tips and tricks from him.

And we love how Western Sydney Intrepid Landcare promote their ‘Friends of Intrepid Westies’ to promote, “so many amazing things happening in Western Sydney and if you’re busy the day of ‘Intrepid events’ there’s so many other ways to contribute”. This is true, there are so many amazing things happening in every community, you just have find them first.

Western Sydney Intrepid Landcare have a few upcoming events in September and November (their August event is sold out). To register for their events or get some inspo, follow their Facebook page –facebook.com/WSintrepidlandcare